I realized not everyone might know what TPN is. It basically means I will be getting most to all of my nutrition through an IV, as my digestive tract seems to be working less and less. TPN is essentially life support, without it I will likely die of starvation in a few months as I can’t eat more than a few hundred calories.

There are huge risks to IV nutrition too, the worst being sepsis and liver damage. This is a treatment that could very well kill me (5 year survival is 40-60%) but without it I’d certainly wind up dead. It’s scary, but necessary.

I have a really hard time thinking myself as ‘sick.’ That’s beginning to change as my symptoms get more severe, but each new thing becomes a new normal for me. Of course when I get used to a new thing the next thing tends to show up. Case in point, I just got used to tube feeds, and now there’s daily IV infusions of nutrients around the clock.

Funny story with the tube feeds too, occasionally when I see a character stand up on TV my brain thinks, “They forgot their backpack! They’re going to pull on their tubes!” Brains are weird. 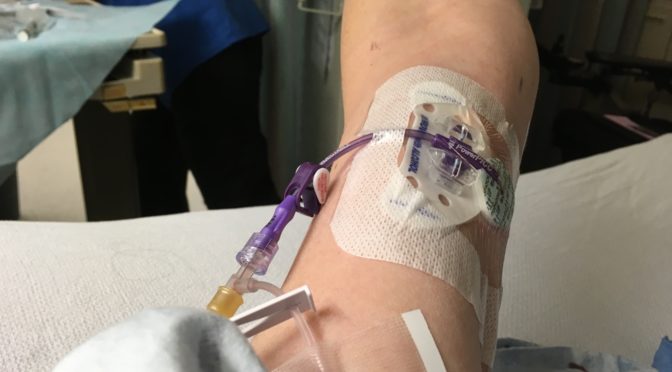 PICC in! It’s purple too, my favorite color. Probably starting TPN tomorrow. Now I have three tubes sticking out of my body. Isn’t life interesting…

So I had my appointment with my GI today. It turns out he didn’t mean the letter he sent to be as inflammatory as it was. I think the fact that English is his second language can be a problem at times.

He mainly wanted to make sure I am talking with a therapist, since this is a lot to deal with. When I assured him I was, he said he was going to write a second letter for the chart to undo the first. I wish he’d just talked to me.

Anyway, I’m scheduled to get a PICC tomorrow and start TPN alongside feeds with the goal of hopefully finding a regimen through the tube that will get me what I need. Good thing too, as the tube seems to be going the wrong way of late. i had to go on bowel rest last night because the pain was so bad, but at least it’s a little better today.

A heckofalot of drama that was likely unnecessary, but at least he’s willing to still help me out and do what is needed. Now it’s time to wrap my head around the fact that I’m starting TPN. With all the drama, I’m not sure I’ve really processed that yet.